Marrakech marathon 2016 - a riot of colour

I came to Marrakech full of anxiety about running the half marathon. My glutes, hams and knees had been giving me hell during the training, and lately even my toes were playing up.  Combine this with an irritation in the eyes and a persistent mouth ulcer, and you have a very sorry me.

The day I arrived I stupidly made it all worse by going out on a run and deciding to have a race with a caleche (horse-drawn carriage): I went too fast and so the next day my hams were worse than ever.
But Marrakech is really the place to sort all these things out. I went to the pharmacy about my mouth and they gave me a very homeopathic-looking spray containing bee pollen and cloves and cinnamon and eucalyptus. I told them about my aching legs and said should I go for a cream or a massage. A massage the two men said without hesitation.

In Morocco massages are everywhere. You can go to a hammam (public bath place) for the complete treatment or you can go to a centre for ´remise en forme´ (putting you back into shape).

As I said, hammams are all over the place in Morocco – all Moroccans pay them a visit at least once a week and I am sure that is why they have such fantastic skin and hair. Treatment consists of steaming first in a sauna, then being scrubbed and exfoliated (could not quite believe the amount of skin coming off my legs the first time I went) and washed with chunky bars of olive oil soap. The finale and the best part is the massage: lying on a stone slab, bit by bit your body is dealt with in a series of wonderful strokes and pummellings, using a combination of sweet-smelling oils (rose and argan seem to be predominant). You come out feeling 25 years younger.

This time, however, I decided I needed some putting back into shape, so went to have my legs attended to by Leila: she told me they were too hard and I did not leave until she had completed the job of softening them up.  It was so wonderfully relaxing I almost fell asleep on the table. 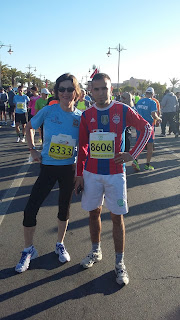 The morning of the marathon loomed and I was up bright and early and having my hot chocolate when the next crisis occurred.  Aziz, who was coming with me to the 9.15 start, rang at 8 and said the race was starting in 15 minutes! Aaaargh, I threw down my croissant and RAN out the door, past the Koutoubia and through the park to Bab Jdid (the New Gate) where I found him waiting with Hicham, his friend who was running and who confirmed that I was right and the race was starting at 9.15 after all.

(Hicham is young and fit and last year ran the race in 1 hour 35 minutes. This year he knew he had to equal that time, because his shift in a restaurant was to begin at 11!)

The start, on the Avenue de la Menara, was an impressive sight. This year there were over 10,000 runners, seemingly from every nation under the sun. Huge silky red Moroccan flags unfurled in the crowd, while drummers dressed in the green and red of the flag thundered away, stirring the crowd of dancers, stretchers and chatterers. I was surrounded by Arabic, French and Italian commentaries as people bent and jumped and generally tried out their muscles in every way.

The mass moved slowly over the line as the start gun went off at 9.15 and we headed down a leafy avenue through Hivernage (the hotel area) into Gueliz, the ´nouvelle ville´, turning away from the huge new railway station to plunge down a route of back streets which finally emerged into the olive groves of the Menara Gardens.

The Marrakech marathon really has to be one of the most stunning marathon routes in the entire world. After we left the Menara´s olive groves, we ran down the main airport road (traffic blocked to allow our progress – I was wondering about people missing flights!) and then turned right to face the sun, with the pink city walls on our left and the towering snow-capped peaks of the Atlas mountains ahead. The sun in my face felt good at that point (too early to be hot) and helped pass a good 5k in this direction before we turned again to run in some welcome shade past yet more olive and orange groves, this time the Agdal Gardens.

Another 2k and this time the turn was to the left, and now we had the sun behind us, bleached city walls on the left and vast stretches of desert on the right – a real sense of northern Africa.

Every so often there would be pockets of people cheering and clapping – ´bonne courage madame´, some said kindly to me. Happy kids held out their hands for a high five – having fun with them like this gave me bursts of renewed energy and off I would go again.

There were thousands ahead of me of course, so every 5 km or so I came across a section of the road both soaked and covered in orange peel … and then a little further on there would be a rainbow of sponges littering my way – a bit of a slithery hazard, but you need your water and the sugar-fruit boost on runs like this.

We were back into the city for the last punishing 5 km or so, and this really tested my reserves. It also tested the patience of the traffic being held back by policemen – at one point a bike just in front of me tried to break through, but a furious gendarme had got to him before he had any chance of getting to me. Those bikes revved and roared in frustration, but the police (and army, actually) were having none of it.

A final lung-choking sprint to the line, and then there really was a bit of Moroccan (or French, as race organized by French) chaos, as after medals were handed out we were all squashed into one long narrow corridor on the road in the sun, queueing, shoving, pushing, to get out past the barriers and be given a precious bottle of water. People unable to wait – a woman by me nearly fainted – were screaming out ´lma! lma!´(water) and race officials were torn between compassion and duty...

I was too dazed to be able to focus on anything. I had crossed the line after about 2 hours (still awaiting official results) and could scarcely believe that the legs had held up. I copied a ring of runners doing stretch exercises and then sat on the pavement and felt hot and hungry and wished I had some money to buy a sesame bun from the man offering them to me. He can´t have done much business as most runners were like me and had nothing with them (except their phones of course!).

And Hicham? Again he achieved 1 hour 35, which meant he finished the race at 10.50 and ran over to the restaurant where he works to start at 11. A 22-km run before a 12-hour working day: that is what I call impressive.

I walked slowly back home wearing my T-shirt and medal, and street sellers and taxi drivers and people everywhere called out: ´Felicitations six thousand three hundred and thirty three!´ (6333, my number, but everyone spelt it out in full). They made me feel great. Would people in England have called out to me like that? I wonder.

En route to my favourite café, I stopped to look in a shop. Seeing my T-shirt, the shopkeeper asked if I had won. Not exactly I say. He asked to see my medal: ´oh it´s a gold one!´, he said, ´you are the winner! You must have won a lot of money!´

I explain sadly that apart from the medal I won walu (nothing). But no, he corrected me, ´you have won sport – vous avez gagné le sport – and with this you have won your health´.


Oh they are so good at making the most of a situation these Moroccans.
Posted by Fogmaroctrips at 02:26 2 comments: