Fun on the food stalls at night in the Jemaa

In the evenings in Marrakech, the best fun is to be had eating at one of the food stalls in the fabulous Jemaa el Fna - the huge heaving mass of vitality that is the old medina's central square. In the day it's fabulous enough - the vast square sits around the shops that border the souks in a kind of L shape and there are snake charmers, monkeys, acrobats, and henna artists galore. All kinds of characters put their blankets and goods on the ground in colourful and artistic displays and the fresh juice stalls do a roaring trade - at 4 dirhams (under 40 cents) a tall glass of orange juice, it's just too good a bargain to miss. 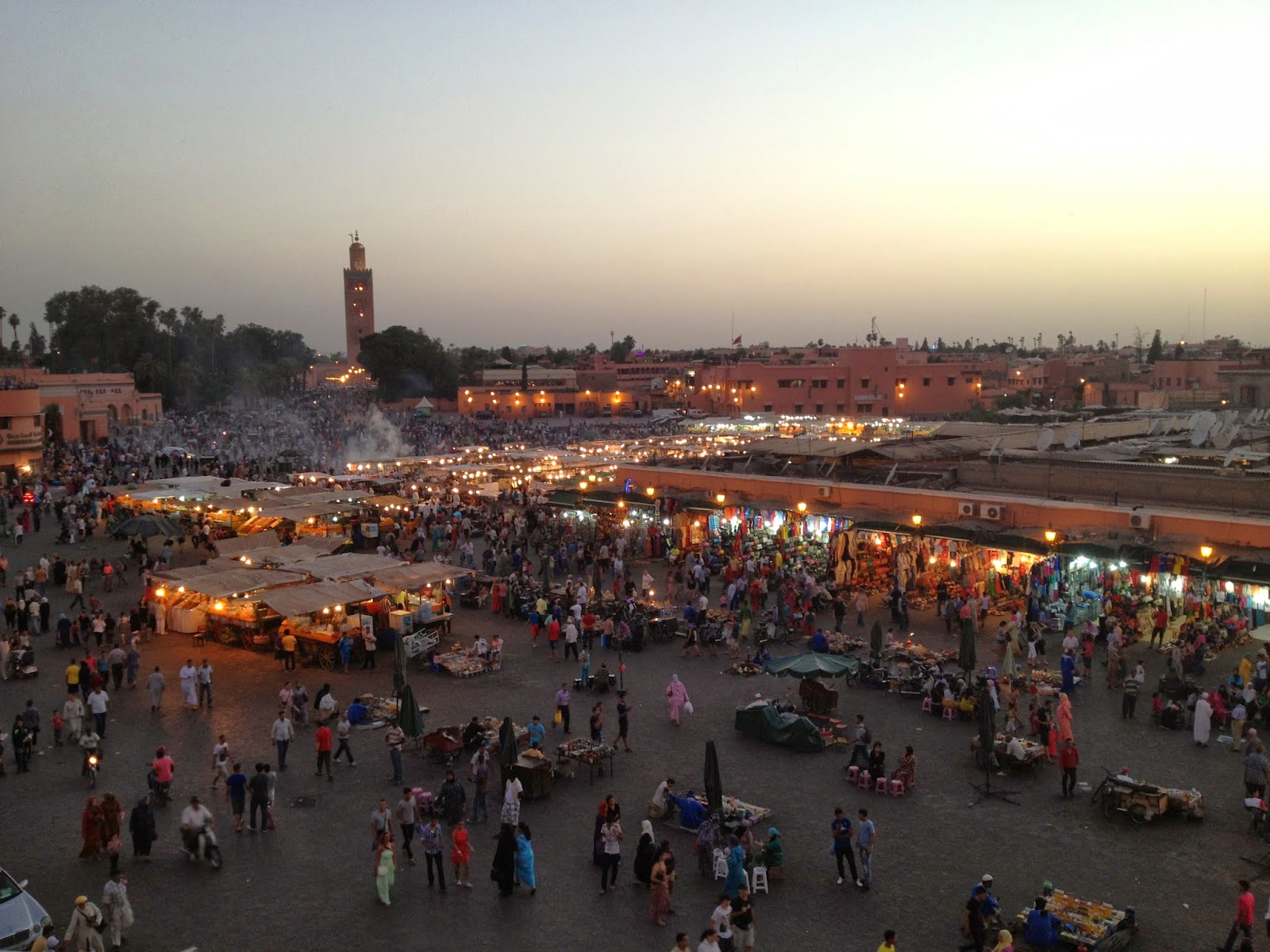 But it's at night that the Jemaa really comes alive. Groups of men gather round story tellers from the mountains, bands of musicians get going, thrumming on their drums, and row upon row of exotic food stalls, lit by gaslight, and displaying mountains of delicious-looking dishes, appear in front of it all. They are all numbered and the trick then is to persuade as many people as you can to your stall, so the air is filled with cries in every language, as both Marrekshis and foreigners are lured to the benches. Those stallholders have perfected the art of persuading people to eat their food in as many languages as I have ever heard!

I eat out there in the Jemaa as often as possible, not only because it is great value, but because it is also the source of high entertainment. In the winter, the harira soup is a winner at 5 dirhams - for 50p you have a delicious combination of chick peas and lentils and cumin and coriander and tomatoes and onions. Oh, and sometimes meat too! And there is just about every other Moroccan dish under the sun available, with all the usual tagines and cous-cous and fish ... and a whole plate never costs more than 3 or 4 euros.

There are also strange and slightly terrifying things like sliced sheep's head, tripe and calves' feet - but these are just a little bit beyond my range.

I have great fun talking to the men on the stalls, who all want to learn as much of every European language as they can, so that they can perfect their powers of persuasion. So I give them lessons in Spanish and Italian, and they return the favour with me in Arabiya ... I learn how to stop annoying salesmen with 'Skot! Stacheni frasi': I think this means 'enough of your stupid remarks' but am not 100% sure ... it always stops them in their tracks anyway.

Hisham and Rachid, two of my favourites at stall no 30 (but on some nights they are mysteriously at no 43), keep me there as long as possible on lonely nights with complimentary glasses of mint tea ... the longer I stay there, after all, the more chance they have of luring other tourists in ... I oblige by backing up their sales cries with convincing tales of how delicious it all is. Soon I think they are going to let me eat there for nothing - especially in the winter, when it is so much more of a struggle to pack 'em in.

They are all so good-natured and tolerant, these laid-back Moroccan men. Old ladies approach, trying to sell packets of tissues and young sub-Saharan boys bring their carvings - and Hisham and Rachid have a teasing way with them, but somehow they never offend. When snooty city women from Casablanca turn their noses up at their approach, and impatient tourists push them out of their way, they just shrug their shoulders. One young woman from Rabat sitting next to me suddenly screamed at them one night, and left in a fury. 'Crazy!', says Hisham cheerfully.

All this and more can be found on my website! Do have a look: www.marrakechtailormade.com 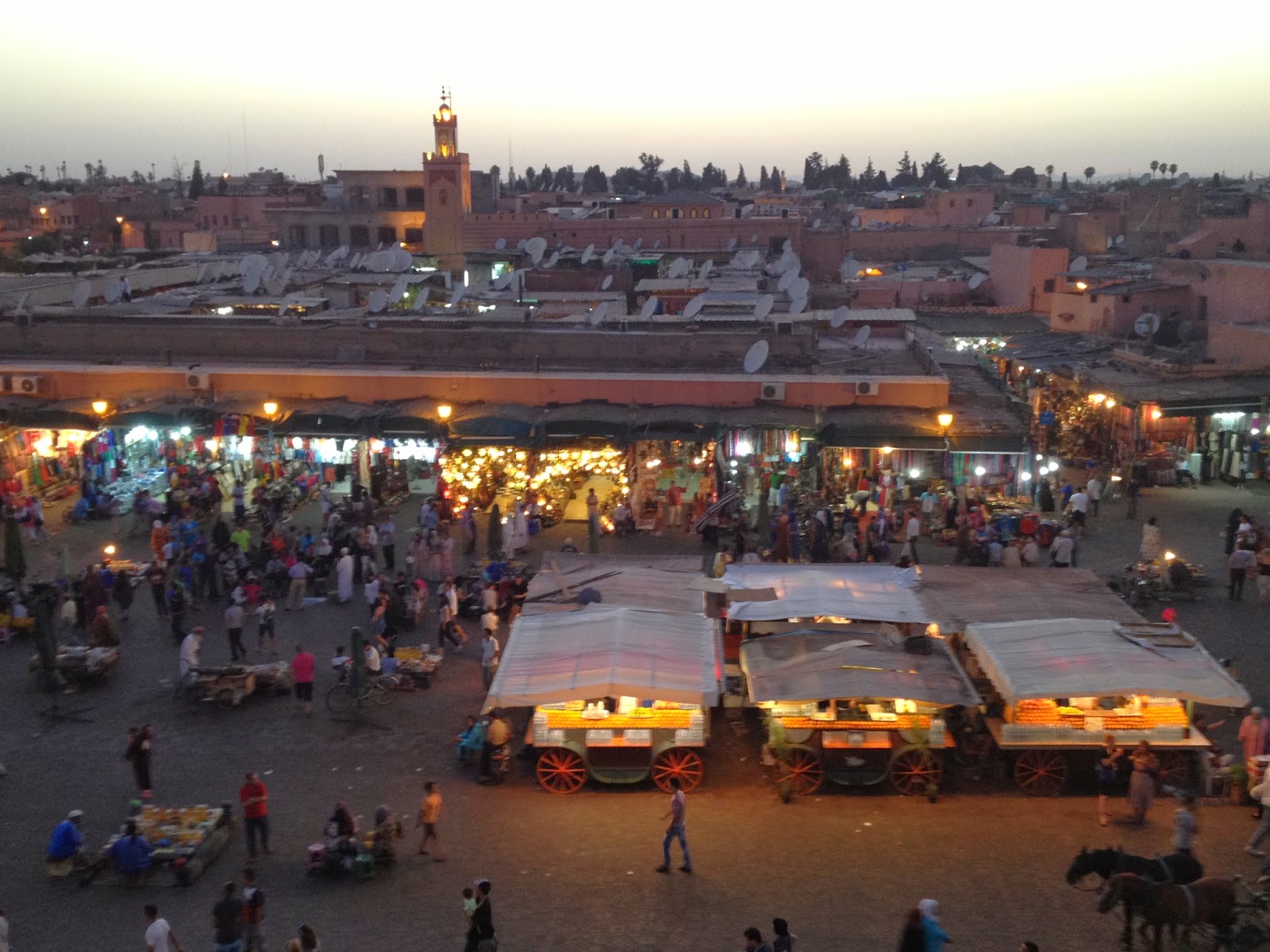 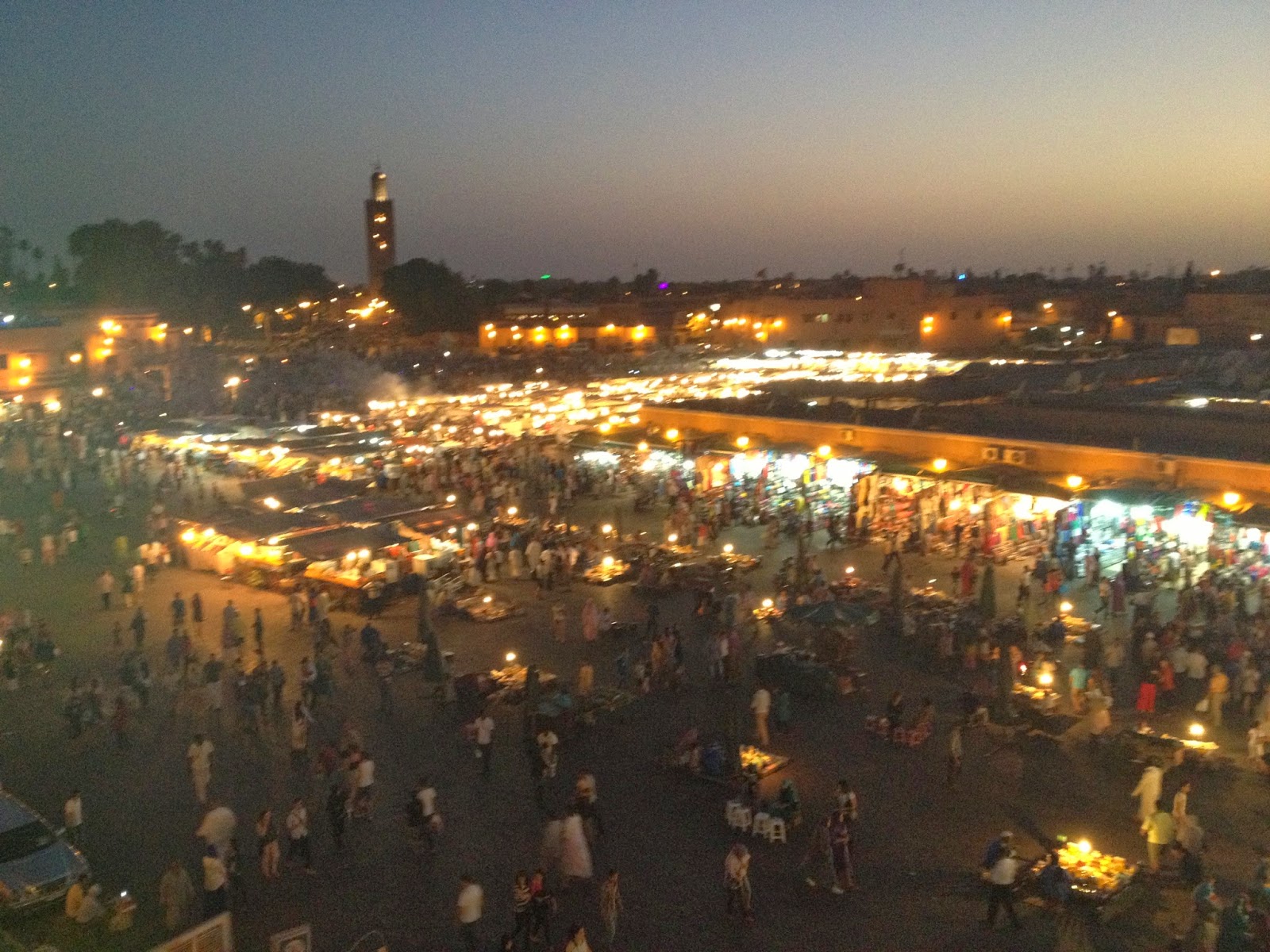 Posted by Fogmaroctrips at 07:26 No comments:

When I was in Marrakech in February it was unseasonably cold and I simply had not taken enough clothes. I could have bought a djellaba in the souk, but I've done that before and when you get back home you never wear it again (it's like a lovely embroidered felt dressing-gown with a big hood, but there's no zip opening - ie, you have to pull it on over your head and then you're sort of enveloped inside it - a bit like a onesie except it doesn't have any trousers).

So one morning I descended the stairs decidedly disgruntled, having frozen half to death in the night. Thami, the hotel manager, is concerned by my appearance. I explain I just don't have the clothes for the winter - I have left winter behind in England and expected warmer climes here.

He tells me he has the solution: there are 26 voitures in the 'garage' behind the hotel and they are all selling warm clothes.

Excitedly I walk behind the hotel, but I see a road and I don't see any garage (Thami's directions are often a bit mystifying). So I go back to him and say I can't find it. He checks around, then takes me by the hand and leads me through the hotel kitchens to a small door ... and opening this we enter into a vast sandy yard, which is simply full of small white vans - more than 26 I reckon. And out of the back of these vans are appearing mounds and mounds of tracksuits, long tops, fleecy dressing gowns and pyjamas ... and loads and loads of sports stuff. All in quite the most extraordinarily vivid colours ...

Just as soon as these mounds accumulate they disappear, as they are packed onto trailer-type things, which strong young men pull away, out of the yard - they are heading for the souks and the shops lining them, where they will set up instant stalls and try their luck.

None of these men speak any French - a rare thing in Marrakech. But these men have come from outside town, their imported Chinese goods from God knows where. And they will not have had much of an education, if any ... hence their language is confined to Arabic or Berber.

Moroccans who are fortunate enough to go to school have half their lessons in French - hence their immaculate control of both language and accent, something I envy them for sooo much (having studied French from the age of about 5 to A-level, I still sound like someone on a beginner's course ... with an Italian accent).

Unfortunately the colours of the clothes produced by the voitures are all just a bit too much for me in the first light of the morning, and I let the men go on their way, their first chance for a sale at the gates to the yard, where a gaggle of women have gathered - they are not going to walk all the way to the Jemaa to have their pick!
Posted by Fogmaroctrips at 05:27 No comments: