Football in the heart of the Mellah

It has been wonderful but terrible watching Morocco play in the World Cup … because their team, the Atlas Lions, are soo good, but they have had such bad luck: in their opening game an own goal in the last minute allowed Iran to beat them, a jammy goal did the same for Portugal and in their last – simply fantastic – encounter, it looked like the Lions were up against VAR instead of Spain. They ended on a 2-2 draw, but were definitely the better side. Awful bad luck.

Yes, the Atlas Lions are fantastic players, but I wonder how good conditions are for aspirational football players in Marrakech?

Recently, I came across a revealing scene that said a lot about football in this city. There have been several ‘improvements’ made to the in the last few years (although many complain that this is all done to make the place look better for tourism, with very few benefits for the locals) and one particular area – the Mellah – has seen some quite drastic changes.

My favourite bar lies concealed in a corner of Place des Ferblantiers – a square right in the heart of the Mellah. Once this was a charming little square, shaded by palm trees, and punctuated by the sound of metal workers hammering away at their lanterns as they sat outside their shops around the square. A lovely fountain stood in the middle.
.
But now the Place des Ferblantiers has become a large open rectangle with very little in the way of charm. Most of the metal workers – ferblantiers – have been persuaded to leave their shops and offered new premises across the road. The square has been enlarged considerably, the fountain destroyed, and most of the palms also removed. God knows why. Some architect will have convinced the authorities that it is a ‘cleaner’ look.
For me, all one can do now with this large open space is cross it to the bar. But during the daytime and early evening it has attracted some groups of smallish children, who run after each other and play games there. 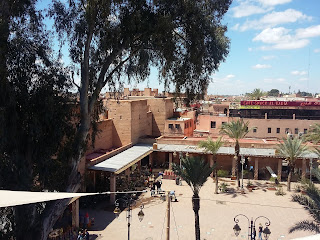 I generally arrive after 10 for my glass of something relaxing – I go to the top floor and gaze out over the huge eucalyptus tree (they have not dared cut that down as it has been there for ever) to the high walls of the neighbouring Palais Badi and to the lights of the medina in the distance.

At this hour there are still children screaming and scurrying around the square, with their parents probably now employed by the new restaurants and tourists shops across the road from the square.

But as I was leaving the bar the other night after midnight, I found that the dynamics of the square were quite dramatically different. Out there in the square, I was amazed to discover two fully formed adult teams playing football in that large rectangle – and playing it very seriously indeed.

I asked my friend on reception what they were doing there – why so late and do they not have a better place to train? And she told me that these are football teams from a club who have given up waiting for a pitch they were promised out by the Akbal gardens. They waited months and months for the authorities to build them a decent ground … and finally gave up.

My friend said these teams sometimes play until 3 in the morning! For in the cool and peace of the Place des Ferblantiers at night, they have found an excellent use for that large gaping rectangle. 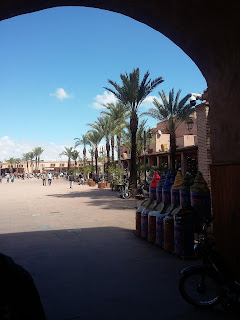 Posted by Fogmaroctrips at 05:14 No comments: