A dream for our children

There is a place I like to go in Marrakech of an evening to have a glass of wine. I have been going there for years now and I know all the people (all men!) who work there well. Over the years some of them have got married, had children, been to places we have talked about, shared stories about the pink city with me – we always have stuff to talk about. And I have learnt most of my more colourful Arabic expressions from them too …

One night I was there after visiting a Book Fair in Marrakech with my friend from the Musée de la Femme. We had been looking specifically for books by Fatima Mernissi – as an ‘Islamic feminist’ in the early days of Morocco’s independence, she lectured in sociology at the Mohammed V university in Rabat and cut quite a controversial figure, analysing the role of women in Islam, through history and on the contemporary stage.

But that night I took one of her ‘lighter’ books to the bar, a memoir of her childhood spent in a harem in , during the early days of the French protectorate. The book is called ‘Rêves de femmes – Une enfance au harem’ (‘Women’s Dreams – A childhood in the harem’ … but actually translated in the English version as ‘Dreams of Trespass’). This book, in addition to having a beautiful cover of three women in the inner recesses of the palace where they live, also contains a wonderful quotation, which you can see on the wall of entrance to the Musée de la Femme:
‘Dignity is having a dream, a strong dream that gives you a vision, a world where you have a place, where your participation, as minimal as it may be, will change something.’ 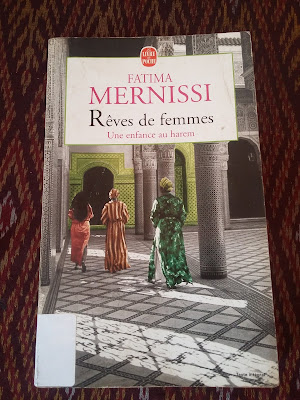 I show the guys at the bar the book, and then the quotation – and I ask Fta, the barman, what his dream is, how he hopes he will change something. His answer comes so quickly it seems he has already given it a lot of thought. He says he dreams only for his children, that they will grow up to be intelligent like me.

Like ME? I say, but I am just a useless woman who comes and drinks WINE here every evening …

No, says Yusuf (one of a trio of friends I call the Three Musketeers), ‘the wine is not important and for us you are more than that. We were just talking about you when we started work today, saying that every time you come here you bring bits of outside knowledge and interesting information for us, photos and books and stories about history and people – and things you have noticed about our language and yours – you know so much about the outside world and we want our children to grow up like you.’

Ooooohhhh, I say I think I am gonna cry – only I actually say ‘I think I am going to rain’, because I am talking in my terrible French and I mix up the verbs for rain and cry … they will NOT want their children to grow up talking languages like I do! 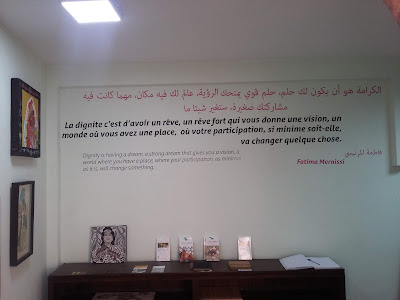 Posted by Fogmaroctrips at 05:43 3 comments: