I have a friend who lives way out in the suburbs of Marrakech and to get there the only option is to take a grand taxi, usually an ancient beige-coloured Mercedes – all taxis in Marrakech are beige, in Essaouira blue and white, and in white: they go with their city's decor.

A lot of these grand taxis leave from one particular street and if you want to go to Imam Mouslim (which I do, cos my friend lives there), you have to walk into this street into a melée of taxis, bikes and people, and begin to enquire from every driver you see ‘Mouslim?’ … and he will direct you to the part of the street from where Mouslim taxis will depart today.

Once you have found a Mouslim taxi, you have to wait until the car is filled before he goes – four in the back and two in the front next to him – and delicately he will try to ensure that women – as far as possible – are separated from men. NOT a good idea to get inside on a hot summer’s day until the last possible moment as you will bake to death.

‘Mouslim! Mouslim!’ he stands in the street shouting and – once we are all stuffed inside – off  we go – edging past all the other waiting taxis and then out past the King´s new palace, through a gate in the city walls, and on up to the Menara gardens before turning and heading for the airport road and freedom …

Inside, I am gently trying to edge myself into a position where my protuberances are not coming into contact with my neighbour on every turn or braking instance. Always in the back (I have never succeeded in making it to the front), I try and make myself as diminutive as possible, and limit myself to muttered choukrans for change when I hand the money over (it’s 5 dirhams/40p for the journey), and tentative smiles in the directions of my neighbours, who are often quite bulky women wearing thick fleecy-type djellabas, even in the summer and carrying large shopping bags. Sweat pours down … and of course the window winders never work. I can’t even reach my phone to let my friend know I’m coming.

It’s another thing at night. Now workers who have finished their shifts are in a mad hurry to get home, and you must locate your taxi and firmly establish your place in it! And it is DARK.

So one night I am squashed into the outside place in the back by the door, four of us already there, when the door opens again – and not one but TWO young men try to get in on top of me. ‘Amara, amara!’ (it’s full) says the woman next to me as I try desperately not to give way and also to shove them out. Mercifully I also look down at this point … and see that one of them has his hand in my bag. I snatch it away from him, and he backs off, but the woman next to me has seen – ‘hchoma’ (shame) she shrieks at him, then yells at the driver about what has happened.

The whole taxi is convulsed with concern for me. ‘Nti bikher?’ (are you OK) they ask, and they mutter angrily about how things have changed, the medina never used to be like this but now there are thieves all over the place etc etc. The women in the back keep up a non-stop flow of enraged commentary and apologies, despite my repeated ‘makein mushkil’ (no problem) and one offers me water, another a little packet of biscuits. Aw.

By the time I near my stop I have been so flooded with attention that I have not yet paid the driver. So, ‘hna’ (here) I say, and ‘hak’ (take) the money, and I hand over my 5 dirham coin. No, no, madam, he says, we cannot accept your money after such an outrage. And he stops and gets out to open my door (never usually done), helps me out, looks carefully around, and sends me off with an ‘aandek’ (be careful). 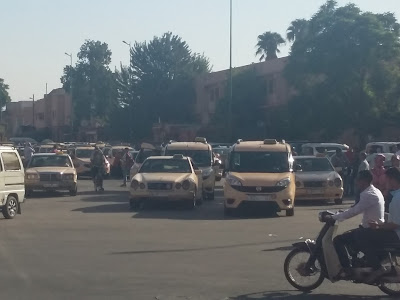 These are the people I like to be with. 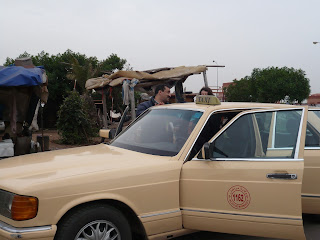